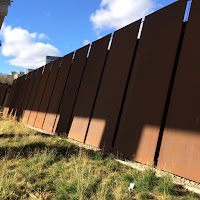 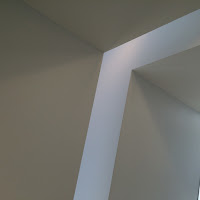 The lobby of the new visitors’ center by Patkau Architects is elegant, as one would expect from this firm.  Southern sun and skylight slide in through deep but narrow openings so that it diffuses softly from the wall surfaces to create a bright, open public room.  But the structure is literally overshadowed by the Gardiner Expressway.  It’s very nearly underneath the elevated highway, such that a clear view of the southern sky and light is impossible.  There will be middays with clear sun and blue sky that leave the center in significant shadow as seen in the photos, above.

One imagines that this center and exhibition space might have been first designed for another part of the side–maybe on the north side of the open field instead of the southern edge. The tilted Cor-Ten panels seem to be shying away from the highway structure, fearful of it.  The lobby peeks through, in between the steel panels, toward light, as if through spread fingers, to protect itself from an impending blow.