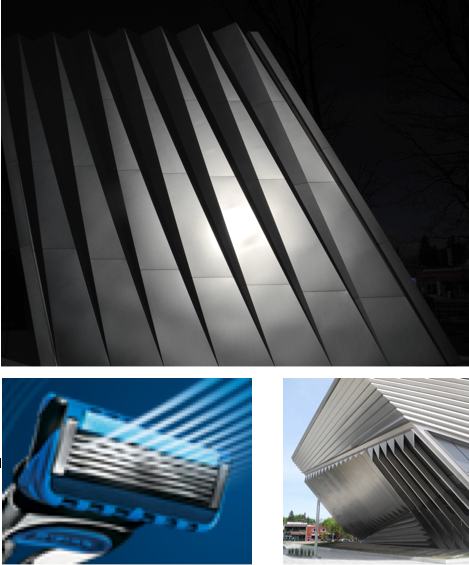 It has been suggested that Zaha Hadid’s Broad Museum in East Lansing looks like the business face of those multiple-bladed men’s razors.* The lower left image, of a Gillette razor, depicts the device as (a) emitting some kind of spooky shaving rays or (b) maybe blocking incoming radiation.  I’ll assume that the Hadid office had something like the latter in mind, with its deep, stainless steel fins arrayed across the museum’s large, glazed openings (lower right image), oriented such that they will most certainly receive direct sun.

The top photo, of a portion of the museum exterior, is not exactly the way the museum looks, but the reason it turned out this way, a happy accident in terms of taking graphically interesting photos, is the point I want to consider.  The photo was taken on a bright, sunny, clear-blue-sky day in mid-April, just after noon.  The camera was set to automatically determine the aperture opening and the length of time its shutter is open.  Following its automatic program, the camera correctly read the intense glare of reflected sunlight and determined that, with so much energy fleeing the stainless steel surfaces, it set itself so as to drastically sift out extra light.  Otherwise, faced with an unmediated blast of solar radiation, the camera would have produced nothing more than a white image.  The photograph is evidence that there was still so much sunlight jumping off the building’s skin, even after the camera shut itself down, that the essential texture of the building was still discernable.  However, the camera had to shut itself down so much that the midday sky went dark: it reads as if it were nighttime.  Viewing the building, our eyes work similarly to defend the retina against a flood of glare.

The message of the facade can be read, most sympathetically, as representative of the need to shield artwork from daylight.  The delivery of that message is a little extreme: the glare coming off the stainless steel is substantial (like the rays emitted from those razor blades).  Another way to consider a working elevation for a building, a museum or otherwise, is as a design that not only shields the interior from a surfeit of illumination, but works to shade itself and, at the same time, treat the viewing eye gently.

Inside, the small museum has six long-ish galleries that stretch away from a sky and north-side illuminated central stair.  It’s a simple plan idea and entirely appropriate to a museum this size.  It is at this center where daylight is permitted to enter most effectively and so that a little daylight sneaks harmlessly into the galleries and helps us to orient ourselves.  Light also enters the western galleries, from the west and southwest, limiting the work that can be shown to that which is durable enough to resist the deteriorating rays of the sun.   Deep fins and tinted glass will filter the light somewhat, but the uses of these galleries must still be constrained.   The light is welcome visually; the curators will no doubt take care to work with it.  The upstairs eastern gallery only receives a bit of daylight from the central stair at one end, making it safe for more fragile artworks.  The café at the east end, near the east entrance, is substantially daylighted and with considerably less protection for the interior spaces. The space is visually interesting, open, patterned with light and shadow, but may sometimes turn out to be uncomfortable.  Lots of air conditioning may be needed.

The question is, does the aggressively variegated, reflective envelope and the configuring of the building so that it appears to be aiming itself at something, contribute significantly to the interior daylight quality and performance of its galleries?  Probably not.  You could get these good interior spaces without all that aggravation. Nevertheless, it’s a nice, small museum.